Mount Maunganui, Feb 2: India rode stand-in skipper Rohit Sharma's fifty to post 163/3 in 20 overs against New Zealand in the fifth and final T20I here on Sunday. Rohit had to retire hurt on 60 of 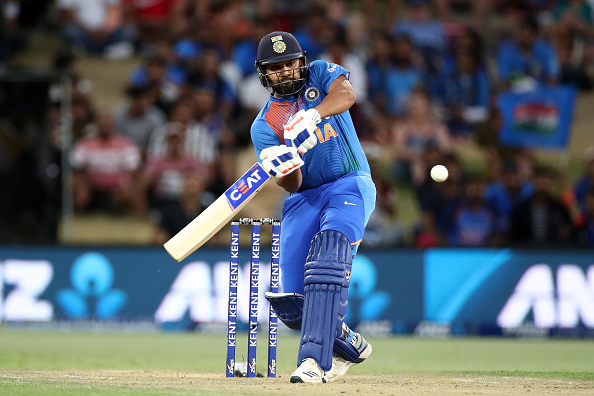 Rohit had to retire hurt on 60 off 41 deliveries (3x3, 3x3) after he suffered from cramps and initially decided to continue, only to soon realise he can no longer run.

But the dashing opener, batting at No.3, led from the front in the absence of Virat Kohli who was rested along with K.L. Rahul whose purple patch continued as he made 45 off 33 balls (4x4, 2x6) as India posted a challenging total.

For the Kiwis, regular captain Kane Williamson, who did not play the last T20I also due to a shoulder niggle, decided not to risk himself with Tim Southee leading in this game too.

India lost Sanju Samson early, the Kerala batsman letting go of another opportunity to impress the team management as he managed just two runs from five balls before being caught by Mitchell Santner off Scott Kuggeleijn who was the pick of the bowlers with 2/25.

Samson had failed in the last match too after being given a chance to open the batting which is his preferred position.

Rohit and Rahul then joined hands for a 88-run second wicket stand which formed the bedrock of India's innings as they reached 84/1 at the halfway stage.

Rahul missed out on a half century as he fell to leading edge off Hamish Bennett with Santner taking a simple catch at cover.

Rohit brought up his 21st T20 fifty in 35 balls and looked good for a big one but he was starved of the strike by the brilliant Bennett as he made Shreyas Iyer work hard for runs in the 14th over. Rohit then suffered from cramps and had to give up eventually after not being able to run.

In the final five overs, India lacked the power hitting as Iyer laboured to an unbeaten 33 off 31 balls. Allrounder Shivam Dube failed again, holing out to Tom Bruce at long on off Kuggeleijn for just five.