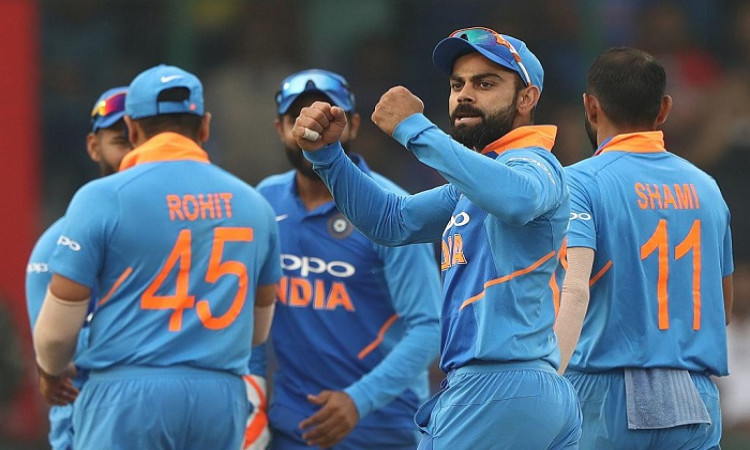 13 March, New Delhi: Australian batsman Usman Khawaja was once again the star of the show as the visitors scored 272/9 in their 50 overs after winning the toss and batting first in the fifth ODI against India at the Ferozeshah Kotla, here on Wednesday.

Khawaja (106) and Peter Handscomb (52) set the platform for a slam-bang finish, but the Indian bowlers came back strongly as the visitors managed just 70 runs in the last 10 overs of the innings and lost 5 wickets.

Ravindra Jadeja was the star for India as he finished with 2/45 from 10 overs and was ably supported by pacers Bhuvneshwar Kumar (3/48) and Mohammed Shami (2/57). Having failed to shine with the new ball, the two came back strongly with the older ball and used the conditions beautifully.

Earlier, skipper Aaron Finch had no hesitation in batting first on a Kotla wicket that had a tinge of green. The opening stand of 76 between him and Khawaja justified his decision. In fact, they started cautiously and scored just 52 in the first ten overs. But more importantly, they had all the wickets in the bag.

India finally broke through in the 15th over when Jadeja struck. It was a typical Jadeja ball, pitched in line and turned just enough to beat Finch (27). The score read 76/1 and the packed Kotla crowd erupted in joy.

But the joy was to be short-lived as Handscomb and Khawaja combined beautifully to keep the Indian bowlers at bay. While skipper Virat Kohli tried all the options he had in his arsenal, it wasn't to be as the duo looked to start from where they left in the last game in Mohali.

It finally took a brilliant move from Kohli to send Khawaja back to the hut, but not before he had completed his second century of the series. Getting Kumar to use his variations, Kohli waited at short cover for Khawaja to play an uppish drive. The opener did just that off the last ball of the 33rd over, only for the skipper to grab an easy catch. The 99-run partnership was finally broken.

Glenn Maxwell failed to deliver as Jadeja dismissed him for just 1, once again caught at short cover by Kohli. Handscomb followed soon as a Mohammer Shami ball took the edge of his bat in the next over for Rishabh Pant to complete a regulation catch.

From 174/1, the score suddenly read a wobbly 182/4. While last match's hero Ashton Turner (20) and Marcus Stoinis (20) did try their best to finish on a high, the Indians bowled exceedingly well in the second half as they picked wickets at regular intervals to derail the Australia innings.

It finally took some calculative hitting from Jhye Richardson (29) to take Australia to a competitive total. Along with Pat Cummins (15), he took 19 runs from the 48th over of the innings as Jasprit Bumrah wore a sorry look. The last three overs saw Australia score 31 runs.