Ranchi, Oct 21:  Mohammed Shami snared three wickets to leave South Africa tottering as India look on course to complete a 3-0 whitewash after the visitors were bundled out for 162 in their first essay and asked to follow on at the JSCA Stadium on Day 3 of the third and final Test on Monday. At Tea, the score read 26/4 in South Africa's second essay with Dean Elgar (16) and Heinrich Klaasen (O) at the crease. 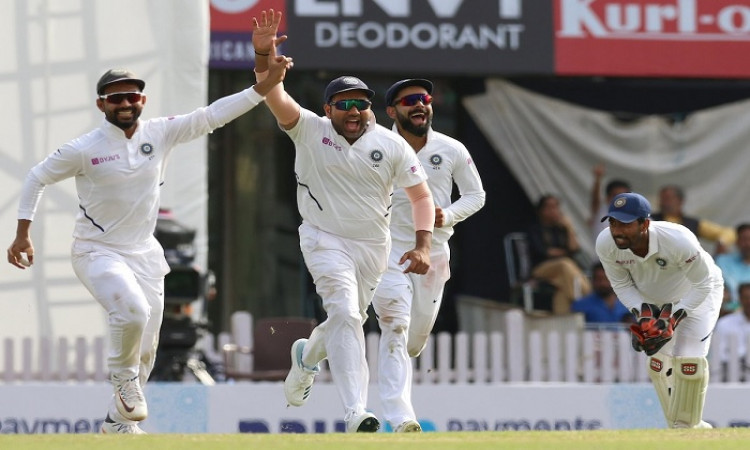 The motley crowd in attendance were thoroughly entertained by Shami in the post-lunch session as the Proteas were bundled out for 162 in their first innings after starting the session six down. Umesh Yadav returned with figures of 3/40 in the first essay while Shami, debutant Shahbaz Nadeem and Ravindra Jadeja all scalped two wickets apiece. Ace off-spinner Ravichandran Ashwin, however, remained wicketless.

Following on, there was no respite for the visitors as it was Shami who once again looked in lethal rhythm. He clean-bowled Zubayr Hamza (0) first and then trapped skipper Faf du Plessis (4) in front as the score read 18/3. But the pacer wasn't done and then sent back du Plessis' 'toss proxy' Temba Bavuma for a duck, caught behind by wicketkeeper Wriddhiman Saha.

But the slide was started by Umesh when he sent opener Quinton de Kock's off-stump cartwheeling with a beauty as the Proteas T20I skipper played inside the line of the ball.

At the break, South Africa were 26/4 with Dean Elgar hurt after being hit on the head by a Umesh bouncer. The Proteas are still trailing by 309 runs with just six wickets in the bag.

Earlier on Sunday, India had declared their innings on 497/9 and had picked the wickets of both the South African openers before play was stopped because of bad light.