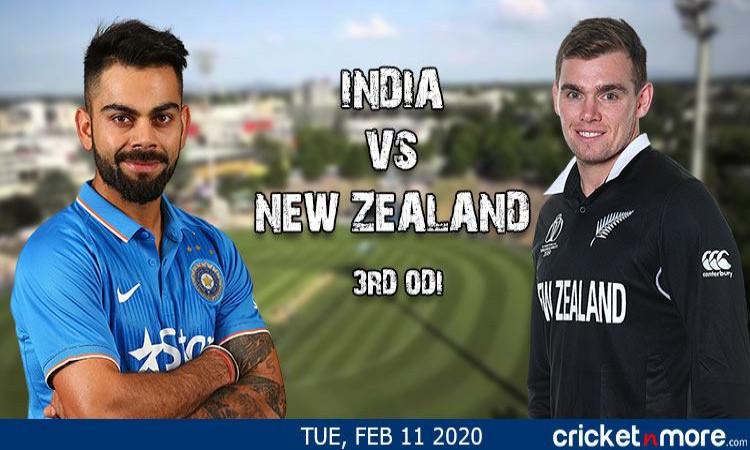 Mount Maunganui, Feb 10:  Having already lost the series, Team India will now look at a consolation win when they face New Zealand in the third and final ODI at the Bay Oval on Tuesday.

While India were comprehensively beaten in the first ODI even after posting 347 in Hamilton, they came out with an improved performance with the ball, only to be undone because of the top-order failure in the second ODI in Auckland.

Also Read: PAK vs BAN: Pakistan beat Bangladesh by an innings and 44 runs in Rawalpindi Test

Having nothing to lose, India could thus give a shot to Rishabh Pant, who has warmed the bench all tour thus far, in the final encounter. They could also bring in Manish Pandey, who made the most of his opportunities in the T20Is, but hasn't been given an opportunity in 50-over cricket.

Pandey performed well in India's 5-0 thrashing of the Black Caps in the T20Is and is likely to replace Kedar Jadhav, who was below par in the first two ODIs. Following the defeat last Saturday, skipper Virat Kohli had said that ODIs will be of the least focus for India this year, but that doesn't mean they won't come out firing and seek to end the series with a win.

In fact, Shardul Thakur, in the pre-match presser on Monday, said that team will look to come out with positive intent and go for the win against in the dead rubber.

"Every match is important. Just because we are 0-2 down, this does not mean that the final match is not important. Every international match holds a key. We are 0-2 down. We can express ourselves and we will play with freedom," Thakur told reporters on the eve of the third ODI.

From New Zealand's point of view, it would be about avenging the whitewash in the T20Is and they would be desperate to go for the kill. For the injury-riddled New Zealand, Kane Williamson's return will be a welcome one.

Tim Southee bowled through an illness in the second ODI and, depending on his progress, the hosts might want to rest him to keep him fresh for the Tests and bring in Scott Kuggeleijn.

Their batters, especially Ross Taylor, has been in great touch and the hosts would once again bank on him to make the most of the batting conditions which are likely to be on offer at the Bay Oval.

The last two ODIs at this venue both featured India, during the 2019 series, and if those games are anything to go by, this should be a good batting track.

India won both their last ODIs in Mount Maunganui and thus would love to replicate that success in order to avoid a clean sweep.