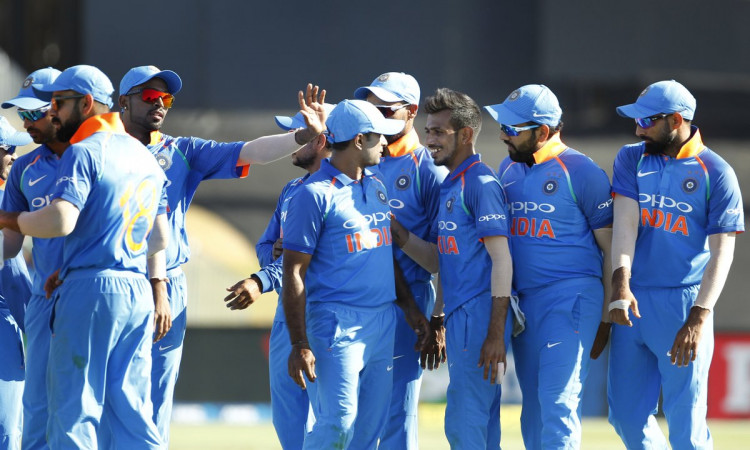 The former New Zealand skipper stood out with a 106-ball 93, laced with 9 boundaries to anchor the Kiwi innings that once again crumbled in good batting conditions.

Besides Taylor, wicketkeeper Tom Latham contributed with a 64-ball 51, laced with a boundary and a six, even as the rest of the Kiwi batting looked pedestrian against the disciplined Indian bowling attack.

Electing to bat on a slow track, New Zealand once again lost the early momentum after losing both openers -- Colin Munro (7) and Martin Guptill (13) in the first power play, to the pace duo of Shami and Bhuvneshwar Kumar, respectively.

Skipper Kane Williamson (28) joined forces with Taylor to steady the ship with a brief 33-run third wicket stand, but the former succumbed to a blinder of a catch by comeback man Hardik Pandya off leggie Yuzvendra Chahal, while trying to break the shackles.

Taylor continued in his customary fashion, meddling the odd ball to the boundary while trying to build a partnership with the stumper Latham, who supported the veteran well by keeping the scoreboard ticking.

The fourth wicket partnership between Taylor and Latham flourished to 119, before Chahal was brought back and the wrist spinner responded in style by dismissing Latham, caught by Ambati Rayudu at deep midwicket.

At 178/4 and with Taylor getting to another half century, New Zealand were on track but Pandya removed Henry Nicholls (6) and Mitchell Santner (3) in similar fashion, caught behind by Dinesh Karthik to reduce the hosts to 198/6.

Taylor, who by now had reached the nervous 90s was eager to get to the three figure mark briskly and up the ante but the right-hander's plans were dashed by Shami, who got his victim caught behind.

India, thereafter did not allow the Kiwi tail to wag this time around and skipper Virat Kohli quickly made up for dropping Ish Sodhi (12) off Shami, by comfortably latching on to the New Zealand leggie off the same bowler in the same over.

Kohli immediately ran Doug Bracewell (15) out before Bhuvneshwar came back to pack off Trent Boult (2) to end the Kiwi innings in the penultimate over of the innings.