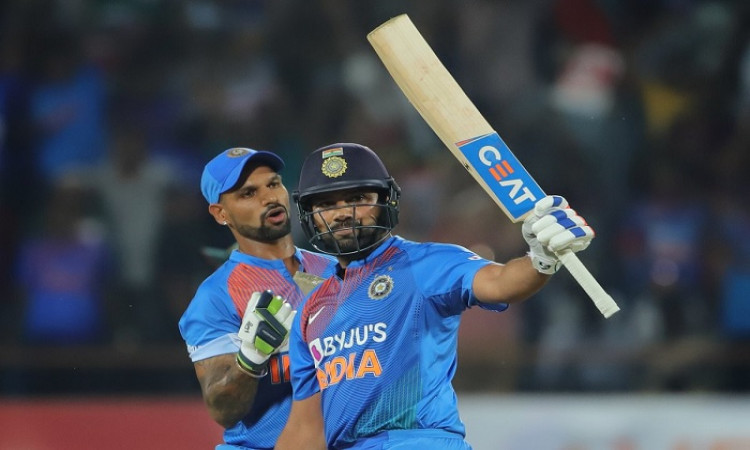 Rajkot, Nov 7: Rohit Sharma smashed a whirlwind 43-ball 85 in his 100th T20 international as India rode his heroics to register a facile eight-wicket victory over Bangladesh in the second rubber here on Thursday to level the three-match series 1-1.

India lost in the first T20 by seven wickets.Chasing a modest 154 for victory, Rohit looked in his imperious best from the get-go as he hit six fours and six sixes to take the tie away from the visitors single-handedly.

Rohit was looking good for his fifth T20 century but fell short in the end as he was caught by substitute Mohammad Mithun at deep midwicket off Aminul Islam in the 13th over.

Shikhar Dhawan -- with whom he shared a 118-run stand which is their fourth century partnership in T20 cricket -- was the first to be dismissed. Dhawan played second fiddle all along and scored 31 before trying to step out and hit the ball for a six and losing his leg stump in the process to Islam.

In the end, Shreyas Iyer smashed 24 off just 13 balls to remain unbeaten along with KL Rahul (8 not out) as India won with 26 balls to spare.The night, though, belonged to Rohit. Leading from the front after missing a catch of Liton Das earlier in the day, the ace batsman, who became the second Indian from his country to play 100 T20I internationals, brought up his 18th T20 fifty off just 23 balls and then smashed Mosaddek Hossain for three back-to-back sixes in the 10th over to underline his ruthlessness.

Rohit never looked in any sort of discomfort as he milked the Bangladesh bowlers around. Rohit hit the ball for sixes, and his fours were as elegant as you can get.

Dhawan could only applaud some of his shots from the other end as Rohit joined Shoaib Malik of Pakistan (111) and Indian women's cricketer Harmanpreet Kaur (100) in becoming only the third cricketer to play 100 international matches in the shortest format of the game in style.

He walked off the ground after being dismissed to a rousing reception.Earlier, Indian bowlers led by Yuzvendra Chahal (2/28) made an impressive comeback towards the back end of the innings to restrict Bangladesh to 153/6 in their must-win second T20 after they lost the first rubber by seven wickets.

Put into bat, Bangladesh could not capitalise on a good start as Chahal's double breakthrough in the 13th over helped the hosts back into the contest.Skipper Mahmudullah Riyad helped Bangladesh cross the 150-mark with a Aquick-fire 30 off 21 balls.

Pacer Deepak Chahar (1/25) and off-spinner Washington Sundar (1/25) did manage to stem the flow of runs but Khaleel Ahmed had a forgettable outing as he was taken for seven boundaries in his last seven consecutive deliveries in the T20 internationals after Mohammad Naim smashed him for three successive boundaries in the second over as Bangladesh raced to 54/0 after six overs.

Rishabh Pant had a bad day too as he messed up an easy stumping in the sixth over off Chahal by leaving a little part of his gloves ahead of the stumps while collecting the ball.It was, therefore, called a no-ball and the visitors got a free hit off which Liton hit two back-to-back to add salt to India's wounds.

Rohit also dropped Das but Pant made amends by running Das out for 29 in the 8th over to get India's first breakthrough and end the 60-run opening wicket stand between Das and Naim.And then Chahal picked two wickets in the 13th over -- Mushfiqur Rahim (4 off 6 balls), who gave a sitter to Krunal Pandya and then removed a set Soumya Sarkar (30 off 20 balls; 2x4, 1x6) -- as Bangladesh were struggling at 103/4. Sarkar was stumped by Pant. Mahmudullah and Afif Hossain (6) tried to accelerate with a 25 run-stand but Khaleel broke the partnership by dismissing Hossain to leave Bangladesh reeling at 128/5.

They managed to cross the 150-run-mark as the bowlers bowled in right areas.