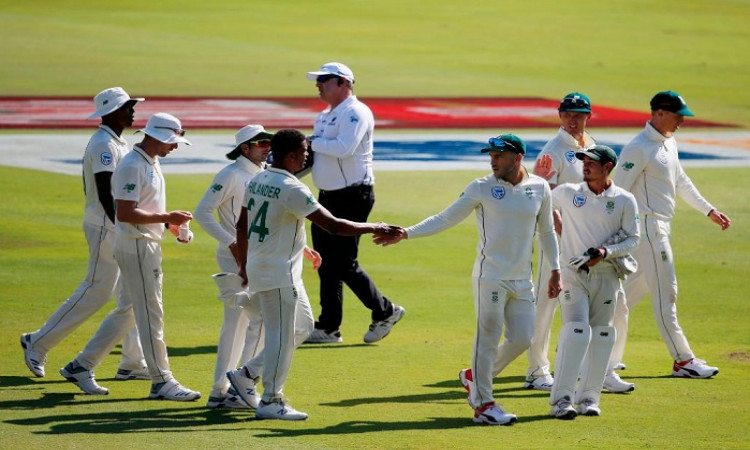 Centurion, Dec 27: South Africa led England by 172 runs at stumps on Day 2 of the first Test between England and South Africa at the Centurion on a day when 15 wickets fell. England lost four wickets in the second and third session each with their last seven wickets coming for just 39 runs on Friday. Vernon Philander, who will retire from international cricket after this series, took four wickets

The Proteas started with a lead of 103 in their second innings. Opener Aiden Markram's lean run continued, falling for just two runs in the first over to James Anderson. Stuart Broad then dismissed Zubayr Hamza. Joffra Archer subsequently bowled his first over of the day and dismissed Dean Elgar off his second ball thanks to a flying catch from wicketkeeper Jos Buttler.

Rassie Van Der Dussen, who was making his Test debut, then stuck on with captain Faf du Plessis to take England past the 50 run mark. Du Plessis got a lifeline when Ben Stokes grassed a catch off him at slips but soon he got a pull shot off Archer wrong and was caught at square leg by Sam Curran.

The fight back from the England bowlers kept England in the game after the batsmen were blown away with the new ball by Vernon Philander and Kagiso Rabada.

Joe Denly provided a semblance of stability, first with captain Joe Root and then with Ben Stokes. Root and Denly shared a 55-run stand for the third wicket while Stokes compiled 72 for the fourth wicket with him. Root fell to Philander after edging him to slips. Stokes fell in a similar fashion to Anrich Nortje. England's innings came to a quick end after their dismissals.