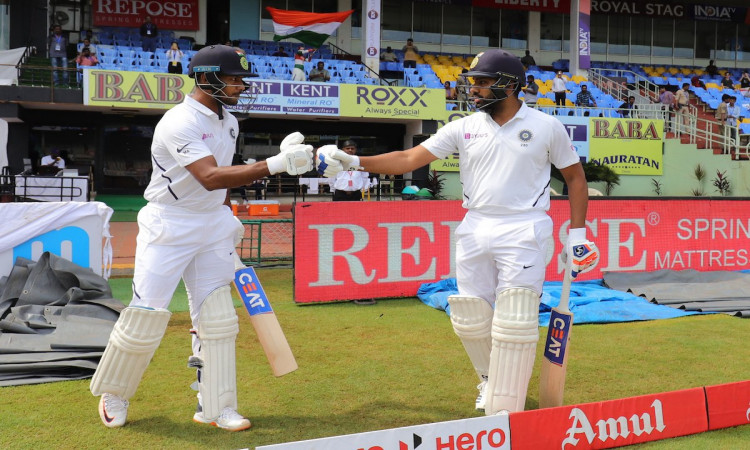 Visakhapatnam, Oct 3: Openers Rohit Sharma and Mayank Agarwal on Thursday took India to a commanding position at lunch on Day 2 of the first Test against South Africa being played at the ACA-VDCA Stadium here.

Starting the day at 202/0, Rohit and Mayank went on the offensive after the first few overs and scored boundaries at will to put Proteas on the backfoot.

Such was the dominance from the Indian openers that they scored 14 fours and a six in the first 20 overs of the day.

Rohit, who had scored his first Test ton as opener on Wednesday, took on from where he left and batted with ease. Mayank also supported him well and went on to score his maiden century in Test cricket. The 28-year-old, who made his debut against Australia in Melbourne in December 2018, scored his maiden Test ton in his eighth inning.

The duo added 317 runs for the opening wicket, becoming the third Indian opening pair to stitch a 300-run partnership, before Rohit lost his wicket as he got stumped while trying to hit Keshav Maharaj for a maximum. The 32-year-old, who scored 176 runs, smashed 23 fours and 6 sixes during his 244-ball inning.

Cheteshwar Pujara, who came in next to bat, also looked comfortable and made sure India didn't lose any further wickets.

None of the South African bowlers looked to be picking up wickets at any point of time as India added 122 runs in the session for the loss of just one wicket.

At Lunch on Day 2, India were well placed at 324/1 with Mayank and Pujara batting on 138 and 6 respectively.