"Smithy loves batting. We all know that. And even know that though we weren't batting in the rest of the Test match, he is still thinking about batting. He does that to help me as well. He is looking at where I should look to pitch the ball. What pace I need to bowl on that wicket. It is all about the conversation. He is going okay. He has got everyone's support in the Australian change room. We are really disappointed with everyone coming out and saying things about Smithy because none of it is true," he added.

Langer added that Smith has ensured that his bat does the talking ever since he has returned from the ball-tampering scandal. 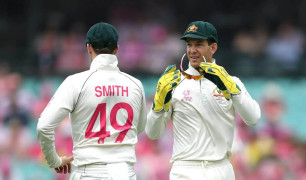 The former Australia opener, who took over from Darren Lehmann as coach after the ball-tampering scandal and has initiated an image makeover along with Paine, backed the team skipper after the wicketkeeper-batsman's on-field chatter with Ashwin was caught on stump mic and became a subject of controversy in mainstream media as well as social media.

"You have no idea how much faith I have got in Tim Paine. He didn't have his best day, no doubt about that. After three years he has hardly put a hair out of place. He has been outstanding as the Australian captain in everything he does. He had a frustrating day, we've got to cut him some slack surely. But having said that, when you set a standard as high as he does and as we do, we understand that we get criticized when we fall below that. But Tim Paine is an outstanding leader and will continue to be for some time to come. So he has my 100 percent support," said Langer.

Lyon, on his part, also backed Paine to come out with an improved performance behind the stumps in the fourth and final Test.

"I think Painey showed a lot of humility and a great leader to come out after the game and put his hand up and play in the game he wanted to play, so I know playing under Tim Paine, bowling to Tim Paine is exceptional. I absolutely love him to death. He didn't have the game Australia wanted him to have. He owned that. He will make sure to come to Gabba. His preparation before the Test match started is on key. He got thrown captaincy in hard circumstances and he absolutely owned up. I think he has been brilliant for Australian cricket," Lyon said.

"He does provide a lot of banter behind the stumps which is absolutely brilliant in my eyes. He probably got a bit more emotional, but he has owned that. I am expecting him to be no different and be as clinical as he has been behind the stumps. He said after the game that he doesn't hate anything more than dropping the catch. And for him to drop three catches behind the stumps is unheard of. He will be raring to go 100 percent in the last Test match and hopefully wrap up the series for Australia...," he added.

With the series tied at 1-1, the two teams will now face each other in the final Test beginning Friday at The Gabba.